U.S. Capitalism and the Miseducation of the African Child: An AllEyesOnDC Reflection 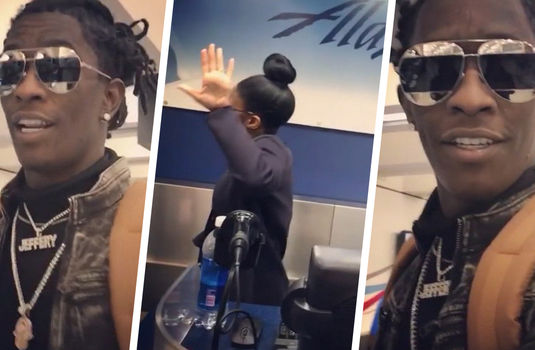 A montage of Young Thug and an airport employee he harassed./ Courtesy photo

My first holiday season as a full-time high school teacher has served as a firsthand lesson about the teenage consumerist, and I’m not pleased.

On the week that quarterly progress reports went home, a few of my students, many of whom haven’t put in much work for several weeks, lobbied for some extra credit and other tricks that would boost their dismal grades. They did this not out of a commitment to academic excellence, but fear of losing them oh-so precious Christmas gifts.

Though slightly disappointed, I wasn’t surprised to hear that truth. Since I started teaching full-time, I’ve seen up close the conditions that stunt our children’s character development and spiritual growth. Doing my job has been an exercise in getting teenagers to see the Kings and Queens in themselves and value the process of learning. Teaching English and Language Arts becomes the perfect conduit to fulfill that mission and get a sense of what motivates the young people. As the days and months went by, the more I realized money was the change agent they valued.

During our studies about grammar and literary devices, we discuss local and national politics, sociology, economics and more via news articles and readings I would assign the class. My students have also reflected on their short lives during in-class writing exercises. Through reading their responses to thought-provoking prompts, I’ve come to understand their desire for wealth and comfort, particularly because they wrote, with a lot of spelling and grammar errors, about the circumstances that brought forth their unstable lives.

Though I don’t doubt that money will change their lives for the better, I in good conscious cannot let them rely on the dollar bill alone. As a college-educated professional, I have a certain amount of privilege that some would say disqualifies me from prescribing a solution to my people’s salvation that doesn’t involve money. However, my experiences around well-to-do people and my knowledge of what folks of that ilk have done from their ivory towers has radicalized me in a sense and made me more cognizant of the sickness that Carter G. Woodson vividly described in Miseducation of the Negro.

Long before formally entering the education profession, I’ve witnessed the morally corrupt nature of many “accomplished,” degree-holding people. Instead of chasing knowledge and inner understanding, those who would become members of the Black elite covet tables at clubs, the latest clothes and shoes, and the status of your favorite trap rapper. Among the Black men, no matter the income level, words like “bitch” and “hoe” always ring out. In general, Black men and Black women lashed out at one another. Yes, I grew personally and professionally in school and in the professional world, but that system didn’t allow enough, if any space for independent, African-centered thought that could cleanse my soul. That’s why at times, on-campus activism, while meant to be a chance to help others, felt more like a popularity contest and notch on the resume rather than a fight to improve life on campus for Black people.

My real education took place a couple years after completing undergrad when I built on my studies of Malcolm X’s fight for oppressed people globally. By learning about my people and their struggles, triumph, and pre-Maafan history, I grew more in love with myself and hungrier to learn more about which was hidden from me. My lessons spanned many disciplines, compelling the maturation of my musical tastes, changes in how I address women, and an evolution in political thought more in line with independent thinkers, not those caught up in the two –party system.

By now, some of the folks – white, Black, Latino, and beyond – with whom I went to school are well on their way to becoming mavens of their industries. However, if everything goes per the real ruling elites’ plan, many will perpetuate the misinformation and exploitation of oppressed people in their subservient roles. Instead of using their power to affect change, they mock those without for suffering in a system that clearly doesn’t favor them.

This sentiment strikes home, for Black people are the primary culprits in this travesty, thanks in part to our conditioning by standards imposed by white people over the centuries. That’s what people like Keith Ellison, who like President Barack Obama had to denounce a Black leader/group for political points, must think about as they compete for roles within the American oligarchy.

That’s also why my students extol the wealthy athletes and entertainers more than the social justice advocates, inventors, business magnates, and the like, even as they fail to live up to the legacy of Ossie Davis, Jr., Ruby Dee, Nina Simone, and others. One of these entertainers by the name of Young Thug recently flaunted his “wealth” at an airport and disrespected two employees.

To carry our fight for liberation forward, young people must yearn to make the world a better place and combat all forms of evil. That cannot be done in environments where material wealth is the goal. I’m not saying that to criticize parents aiming to curb negative behavior by withholding gifts, but to challenge us as a People to push our youth to strive for their best so that it benefits the global ecosystem, not just their ego.

That’s hard to do when college is marketed more like a check on the Successful Adult To-Do List more than an opportunity to grow internally. This makes it more important that we encourage education beyond the confines of academia. Without a thirst for knowledge, how else will the youth be able to critically think long after their formal education ends?

They won’t. Their lives will become a cycle of work, sleep, and happy hours. Right now, that’s how many of the hamsters live on the wheel. If it’s not the degree, the money or fame, it’s holiday gifts that keep us going. You could say that the material possessions have become our carrot stick, to our detriment.

Let it be known that this generation, criticized and looked over by many elders in our community, will be the ones to take this global movement for African liberation to new heights. That’s why the powers that be, through its political, business, and media arms, keep our African and indigenous American children away from their true history. Our adherence to the codes of consumerism that make our children slaves to the corporation seals the deal.

Given the nature of the rat race that’s capitalism, one would argue that we don’t have enough time to care, but it’s imperative that we make time. Our children deserve that much. By no means does that mean keep the gifts away from your young ones this year. However, you should be having a conversation about the need to learn and improve as a human being, something my father used to call “eating book.” Let’s encourage this dialogue and push our young people to create their own happiness, not that which is manufactured by the one percent.

The world will be a much better place for it.

Education, Miseducation of the Negro

One thought on “U.S. Capitalism and the Miseducation of the African Child: An AllEyesOnDC Reflection”