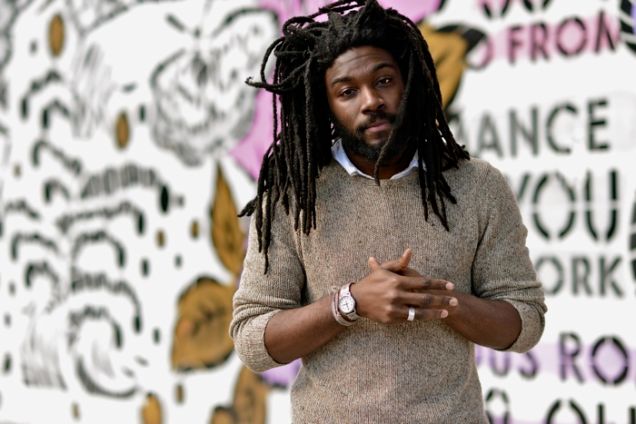 PHOTO: Critically acclaimed author and native Washingtonian Jason Reynolds is scheduled to present the winners of the “A Book that Shaped Me” Summer Writing Contest at the 16th annual Library of Congress National Book Festival at the Washington Convention Center in Northwest./ Courtesy

With the advent of an annual writing contest, parents and educators living along the East Coast can lay to rest their fears that their young ones won’t have many opportunities to read and write now the school year has ended.

For the fifth consecutive year, the U.S. Library of Congress, in conjunction with a bevy of public and school libraries in the Mid-Atlantic region, is hosting a summer essay writing contest that allows rising fifth and sixth graders to reflect on books that made an impact in their lives.

“I’ve been fascinated by the diversity and imagination in these stories. I want to see how young people are stretching their minds,” said Jason Reynolds, a critically acclaimed author and native Washingtonian who’s scheduled to present the winners of this competition, touted as “A Book that Shaped Me” Summer Writing Contest, at the 16th annual Library of Congress National Book Festival at the Washington Convention Center in Northwest on September 24th. The submission deadline passed earlier this week.

Since its 2012 inception, the “A Book that Shaped Me” Summer Writing Contest has attracted more than 1,000 entries from students in the D.C. metropolitan area, West Virginia, Delaware, and Pennsylvania. Each year, a panel consisting of members of the American Association of School Librarians (AASL) selects 30 finalists. From there, a group of educators and children’s book authors choose three overall grand prize winners.

Reynolds, who has served as a judge in years past, explained the qualities he seeks in an ideal entry, stressing that students must be committed to doing their best, even if they don’t win a prize.

“I’m looking for excellence. The barometer is subjective but I need to know that students put in that work. Anyone who takes time to work on their essay should take pride in completing this one thing. Hopefully that will push them to complete other things,” said Reynolds, a Northeast resident.

The “A Book that Shaped Me” Summer Writing Contest comes amid a technological shift that has changed the way children absorb information and posed new opportunities to engage tomorrow’s leaders. More than half of pre-teens in the U.S. have accessed social media sites meant for adult use, according to information collected by Statista, a domestic statistics company. Studies have also shown that when used strategically, the internet can become a valuable research tool for young people.

Many public and school libraries across the country have caught on, creating spaces focusing on STEAM (Science, Technology, Engineering, Art, and Mathematics). Some of the librarians involved in the essay writing contest acknowledged these changes, saying they’re embracing the new while adhering to tradition.

“Today’s librarians are needed more than ever. They are leaders in the area of digital literacy,” said Audrey Church, AASL president. “There’s more information that people need to figure out and students need to develop critical thinking skills as they reflect on the importance of their book. This contest provides a wonderful opportunity for every child participating to think more fully about a book that he or she read. I hope that they reflect on experiences that are meaningful for them,” said Church, also associate professor and graduate school coordinator at Longwood University in Farmville, Va.

Myla Agyin, a 2012 finalist and student at BASIS Charter School in Northwest, said she can attest to value of introspection as it relates to the writing contest. Myla’s prize- winning essay centered on how Ben Carson’s “Gifted Hands” inspired her to pursue a career in the medical field. Since that pivotal moment, has excelled in her studies and become more vocal in conversations about current events.

“That contest was a great opportunity to express how I felt and showing how reading this book impacted me,” Myla, an aspiring pathologist, said. “These days I feel like my views get taken seriously. I’ve become more open. I feel like I can express myself. People need to see the truth ad get a better understanding of the world. I have future plans to write a book. I’m not sure what it will be about but it will be something that I find interesting,” added Myla, now 14.

A Book that Shaped Me, contest, Jason Reynolds, Library of Congress, writing