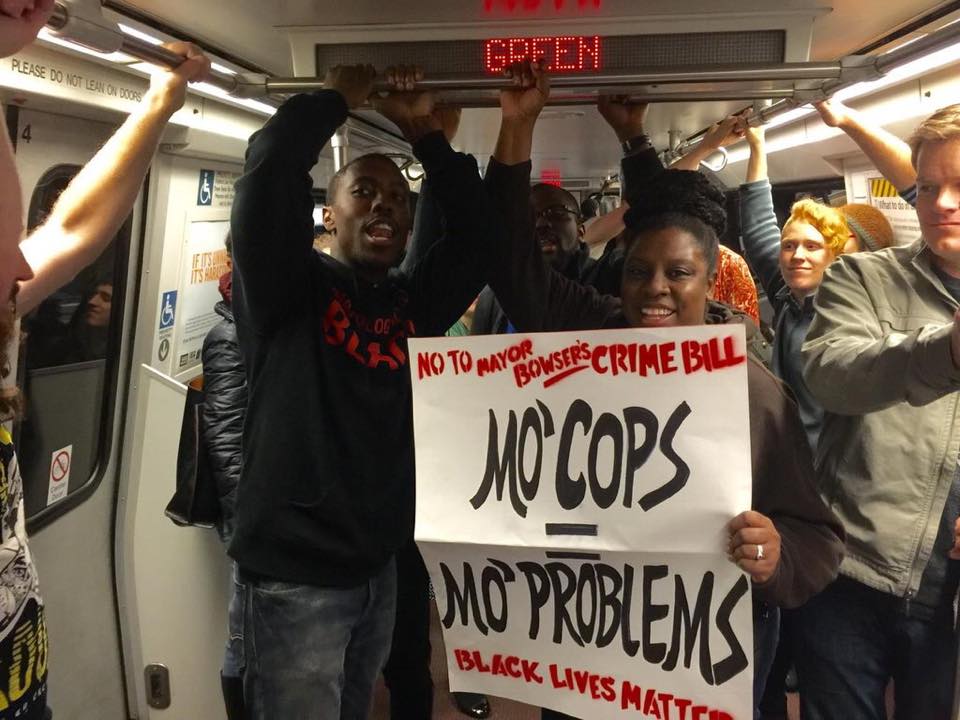 The sounds of protesters’ chants and police sirens caught Aaliyah Ruffin’s ear on what was otherwise a quiet night in Congress Heights. Moments later, she, along with some family members, stepped out on the front lawn and watched as a swarm of protesters marched along Alabama Avenue with signs, banners, and bullhorns in hand.

More than a week after taking to the streets for Jason Goolsby — a University of District Columbia student violently detained by officers outside of a bank in Eastern Market — members of Black Lives Matter DMV and other groups rallied against D.C. Mayor Muriel Bowser’s plan to curb violent crime they say unfairly targets ex-offenders. The pandemonium took place on the eve of a D.C. Council hearing about the proposal for increased police powers.

For Aaliyah, the controversy surrounding the mayor’s proposal brought to mind her yearlong school project about the hurdles returning citizens face in their transition to physical freedom.

“I’ve decided to write about discrimination against ex-convicts because I see it everywhere,” Aaliyah, 17, a senior at Cesar Chavez Public Charter School for Public Policy, told AllEyesOnDC. “Returning citizens have already done their time. I know the state has to keep close watch on them but [they have to] trust them. Some [of these] people are just trying to get over their past. They should be given a second chance to prove themselves to society.”

Tuesday night’s activity counted among a bevy of on-the-ground efforts to combat and raise awareness about Bowser’s proposal. Amid a spike in homicides this summer, she asked the D.C. Council to “close some gaps in our laws” she says allow ex-offenders to commit violent crime. By the time Bowser announced her plan in August, 103 homicides have taken place, two shy of the 2014 total.

If the proposal passes, parolees and those on probation are subject to increased supervision and post-release searches by the Court Services and Offender Supervision Agency (CSOSA) and other entities. Those who violate the terms of their release could be taken into police custody for up to 72 hours. Police union representatives told the Washington Post that armed officers would be on site to detain them. More than 10,000 people would be affected.

Members of the Black Lives Matter DMV interrupted Bowser on the day she announced the plan. Since then, they have reached out to returning citizens’ advocacy groups and residents while advocating for more of a restorative justice mode that takes into account the trauma people in impoverished communities often face. “The people most affected by these draconian laws will be those living in black communities in Southeast. We wanted to canvass and raise awareness to let folks know that the bill might go through,” Goggans said.

“It’s a continuous drama for folks who haven’t been given the appropriate time and resources. We have to re-frame the problem and find constructive ways to build up communities,” Goggans added. “The population affected [by this policing program] is wide. Returning citizens can’t afford to live on their own in D.C. so they live with the relatives. So when cops go in for searches, it affects entire families. We have to build an understanding with folks in power. We’re in this for the long haul.”

Some residents, however, aren’t too enthusiastic about the efforts of Black Lives Matter DMV and other advocacy groups, often describing many of them as outsiders not directly affected by the local violence.

Donna L. Watts, a 20-year resident of the Fairlawn neighborhood in Southeast, said those who oppose Bowser’s proposal haven’t read it in its entirety, telling AllEyesOnDC that keeping the peace should be a priority. Watts, a self-described “conservative from the South,” arguments about poverty and lack of opportunity don’t suffice.

“The proposed legislation should be in effect until for a pre-determined period of time fairly measuring its effectiveness of non-effectiveness. If it is proven to not work, those opposed will have the benefit of not hearing an elected official bring it up again,” Watts, a self-described “conservative from the South” said, adding that arguing this point to detractors often proves futile.

“If I made a decision that got me tangled in the criminal justice system, I can’t see where I have the room to ask for rights beyond the basic human rights,” she said. “There are plenty of families raised with on low-to-no budgets and the lack of capital was not a reason to go on a make bad life-altering decisions. Send offenders to a Turkish prison, or allow all of our U.S. prisons to be privatized, then take a second look at today’s’ criminal justice tactics before picking up a picket sign against it.”

Allen, a 65-year-old retired surveyor, counted among the many who pounded the pavement on Tuesday evening. Recounting his experiences as a troubled youngster and that of nephews who have come into contact with the D.C. police, Allen expressed a desire for city leaders to provide offenders, young and old, with options beyond punishment.

“When they had this all-hands-on-deck mentality, more killings happened. We don’t need any more of the law. We need humanity,” Allen told AllEyesOnDC. “The police have a lack of respect. They are legalized gangs so it’s up to us mothers and fathers to take back our communities. [Where are the] skills development programs. We don’t have any trade schools around here. [The police] can no longer have the carrot-and-stick method. Give us a third option.”