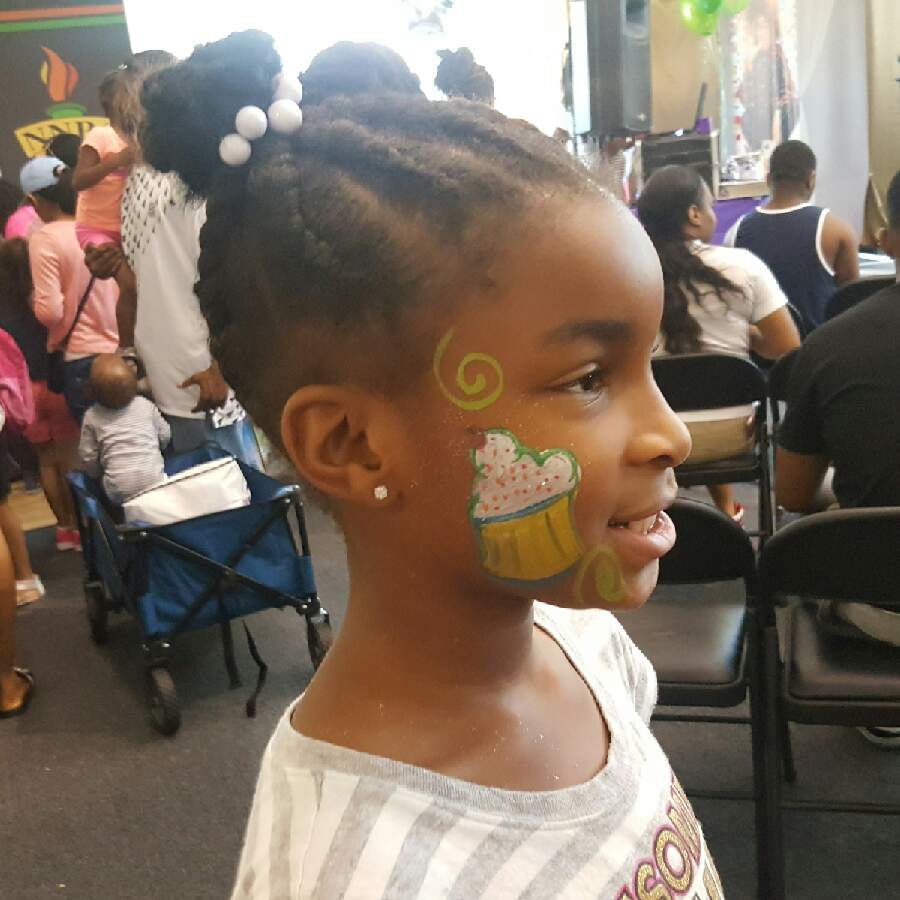 This week marked the beginning of Samuel Griffiths’ daughter’s first year in elementary school and he wanted her to look the part as she starts her academic journey.

On Saturday, the father-daughter pair left their home and walked around the corner to the Thurgood Marshall Center in historic Shaw where, upon walking in its main auditorium, a hair stylist braided the young lady’s hair, free of charge.

For the rest of the afternoon, Griffiths and his daughter enjoyed the sights and sounds of the center’s inaugural back-to-school festival that featured live karaoke, a twa kwon do demonstration, a book bag giveaway, and a portrait artist, and more.

“My daughter is an overachiever. She’s going to the first grade and has already had a lot of accomplishments since she was two or three,” Griffiths, a 10-year resident of the Shaw community, told AllEyesOnDC. “It’s always welcoming to have things like this event in the community. It shows a lot of concern for the kids. [The community partners] are helping them get started with school on the right foot,” he added.

Griffith counted among hundreds of parents, children, and community members, who attended the festival on Saturday, enjoyed a smorgasbord of activities and took advantage of community resources. In the auditorium, parents sat and talked among one another as children of various ages frolicked and danced to the latest trap-pop tunes emanating through jumbo speakers.

Hair stylists and barbers braided and shaped up children’s hair throughout the day. Down the hall, a resident chef gave a healthy eating demonstration. The Thurgood Marshall Center also coordinated on-site HIV testing. Pastor Eric Zimmerman of True Foundation Apolistic Ministries in Clinton, Maryland opened the program with a prayer. In her remarks, Dr. Elizabeth Primas, program manager for the NNPA/ESSA Media Campaign provided clarity around the Every Student Succeeds Act, a federal law taking effect this school year that will allow school districts more flexibility in their policies.

“The best part of the festival was the haircuts for kids,” Shavon Collier told AllEyesOnDC, referencing Darnell Palmer, a local barber who trimmed young men’s hair well into the evening. Collier, a Southeast resident, spent much of the afternoon watching her children play in the auditorium. “We have a lot of low-income families that can’t afford school supplies and other things for their children. This year, I want my children to do what they’re supposed to do academically and get to the level they’re supposed to,” added Collier, a mother of three.

John El-Badr, curator at the Thurgood Marshall Center who brought his daughter and grandchildren, chatted with community members and enjoyed an icicle under the shade. For the historian, the back-to-school festival, located just two blocks from the U Street corridor, conjured memories of what Washingtonians once called Black Broadway.

“Anything that’s positive for our youth, we need to do as many times as possible,” El-Badr told AllEyesOnDC. “Marcus Garvey came to this area. John Thompson came here to play ball. Langston Hughes was here. We have to fight for Shaw, Howard [University] and our institutions like Ben’s Chili Bowl, Industrial Bank, and others that are still here. It’s still Black Broadway, even with the new stakeholders. Events like this are important to show that Black people still live in the community,” El-Badr added.

This year, the Thurgood Marshall Center solely launched the back-to-school festival for the first time after hosting it on its premises for the two consecutive years with the Greater Washington Urban League (GWUL). After GWUL announced it would move the festival to its 14th Street headquarters earlier this year, Thomasina Yearwood, president/CEO of the Thurgood Marshall Center Trust, as part of an effort to meet community demand for the annual gathering, decided to continue the project.

“The kids are prepared, looking good, and ready to learn. That’s the first step,” Stacey Palmer, lead coordinator of the festival, told AllEyesOnDC. “I know the burden school shopping places on your pocketbook. This is why we do it. The community needed it and they got to enjoy a wonderful festival. All the vendors had value and gave the parents what they wanted. I put love into it and I hope people felt the welcoming spirit in that room,” Palmer, also founder of Executive Virtual Assistance, added.

For more information about the Thurgood Marshall Center, visit tmcsh.org.