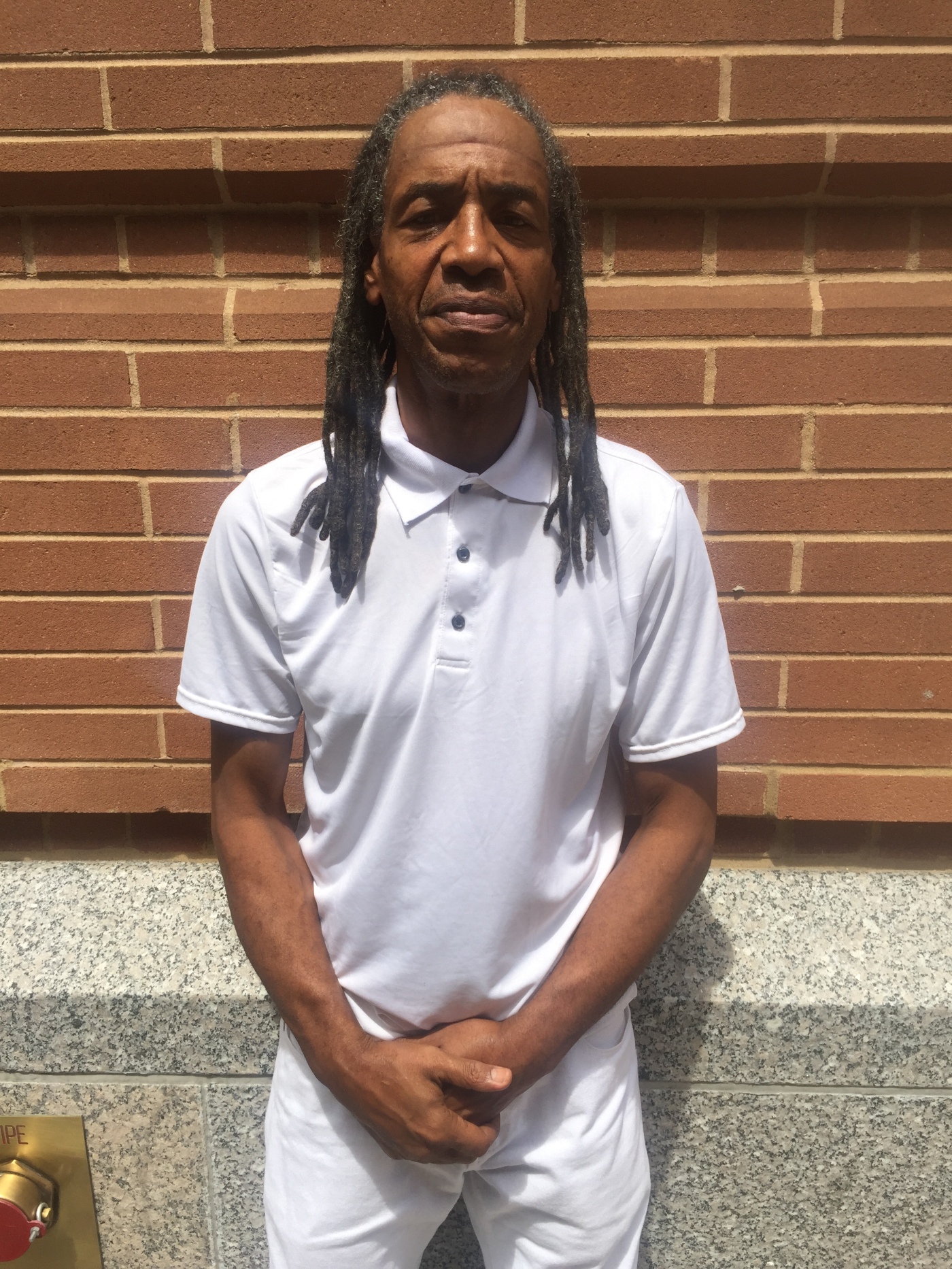 Winston “Kokayi” Patterson is embroiled in a fight for a justice after a middle-aged white man brandished a gun at him during an altercation near the Walter E. Washington Convention Center last month. / Photo by Sam P.K. Collins

For more than 40 years, Winston “Kokayi” Patterson has treated an untold number of Washingtonians through substance abuse and mental health treatment, and natural healing. However, much of that has had to be put on hold after an altercation near the Walter E. Washington Convention Center in Northwest.

Patterson said a middle-aged white man, angry that he relieved himself in the parking lot behind his storefront, cursed, spat on and brandished a gun at the slender, grey-loc’d elder. Officers later arrested the alleged assailant, Michael James Conway of Central Safe and Lock, charging him with assault with a deadly weapon and having a firearm without a business license. They also detained Patterson on a simple assault charge.

Nearly a month after the incident, only one man has to report before a judge.

“My situation’s no different from any Black man who’s been accosted by a belligerent white man, said Patterson, 64, a lifelong D.C. resident. “The conditions of Black people haven’t changed much.”

After his release from the Metropolitan Police Department (MPD) 3rd District precinct in Northwest on the early evening of July 13th, Patterson had to submit a urine sample and adhere to a stay-away order. Earlier this week, nearly 60 people filled Courtroom 220 in D.C. Superior Court during his initial arraignment hearing. The presiding judge scheduled Patterson’s trial for the morning of September 26th.

Efforts to raise awareness about the renowned healer’s case and clear his name have been weeks in the making. On Aug. 2nd, a friends and supporters hosted a fundraiser at Sandovan Restaurant and Lounge in Northwest, an endeavor that garnered several hundred dollars in contributions and featured Al-Malik Farrakhan, executive director of Cease Fire, Don’t Smoke the Brothers, an antiviolence group on which Patterson serves on the board of directors.

Earlier this month, Patterson appeared on the To Heal DC Show with Joni Eisenburgon WPFW 89.3 FM. He also said he met with former D.C. Shadow U.S. Representative Charles Moreland (D), The Rev. Graylan Hagler, and other community leaders. On Wednesday, supporters led a demonstration in front of Central Safe and Lock. On Aug. 17th, major activities are also scheduled to take place. Yuma Bellomee, also known as Dr. Yew, recently did his part in hosting an herb walk in Anacostia Park in the latter part of last month.

“I would like to use this situation to raise awareness of human rights,” Patterson added. “We must fight for the rights of all Black people, against the injustice and repressive behavior presented to us by police officials and people in the community who have a reactionary state of mind.”

On the day of the incident, Patterson planned to attend the Fellowship Conference, then in its second day, with a longtime friend and patient who was serving as a staffer. By the time Patterson could no longer hold his urine, the duo had parked their vehicle directly in front of Central Safe and Lock, located across the street from the convention center on the corner of 7th and L streets in Northwest.

As he walked out of the alley between the parking lot and main street minutes later, Patterson locked eyes with a visibly irate Conway, who was standing behind a raised railing. Soon after, with a bag in hand and a knapsack on his back, Patterson strolled over to the crosswalk. That’s when he said Conway cursed at him. Once Patterson turned around and step toward Conway, the angry storeowner spat on him. In response, Patterson splashed water from a half-full bottle on Conway who then pulled a black automatic pistol out of his right pants pocket. Patterson, attempting to duck for cover behind an SUV, fell into 7th Street.

Patterson’s friend, who asked her name not be used in this story, quickly jumped into action, picking up an injured and disheveled Patterson. As she helped him walk across the street to the convention center, Conway yelled racial epithets at him. While Patterson entered the convention center and used the restroom, she flagged down MPD officers patrolling the area on foot.

For the next hour, six officers, and later two detectives, interrogated, Patterson, his friend, and Conway separately, with pairs of officers taking turns to question each person. Shortly after, they whisked Conway away in the squad car.

By that time, Patterson’s friend had been in the Convention Center engaging in activities related to the three-day event. Officers escorted Patterson, who’d been outside by himself for some time, into the convention center to meet her. After one more round of questioning, they cuffed Patterson and drove him to the 3rd District precinct, where he sat for more than three hours before being released. The next day, court officials set the terms of his release during pre-trial services.

“I didn’t see Dr. Patterson’s arrest coming. MPD misconstrued everything and caused a lot of stress. I would’ve never gotten them,” said Patterson’s friend, a member of Spirit of Faith Christian Center, located in Brandywine and Temple Hills, Maryland. She said Conway’s alleged assault traumatized her, causing her to seek therapy on a couple occasions. She also touched on the hurdles she has yet to overcome in bringing the storeowner to justice.

“I tried to file a complaint against Conway the next day because my life was threatened and they told me I couldn’t. They made it seem like Dr. Patterson was the defendant when he was really the plaintiff. People need to be fair. It’s crazy that the doctor has to suffer like this for no apparent reason,” the D.C. metropolitan area resident added.

Still in shock from what had just taken place, Patterson sent a mass text to dozens of friends, colleagues, patients, and extended family members in the days after, explaining the situation in great detail. A committee comprised of spiritual and civic leaders in the D.C. metropolitan area later crafted plans to raise awareness about the events of July 13th and organize community members of various ages via social media, email, and word of mouth.

“We’re blessed that we could stand by Baba Kokayi,” said Ayo Handy-Kendi, a breathologist and stress manager who served as a member of the organizing committee that hosted last week’s gathering at Sandovan. “People came out because they believe in Baba Kokayi and they believe an injustice has been done. We want him to be let off and we want the gentleman that assaulted him to be reviewed. We feel that he has also committed a threat and should be brought to justice.”

With much of the community on his side, Patterson said victory seems to be on the horizon.

“The response as it relates to my situation has been overwhelming. The concerns my colleagues have shown is a true testament to Black love and our ability to support our own,” he said. “The grassroots, political, health, education, Black media, and spiritual community is coming to support, along with a multitude of community organizations.”

One thought on “Local Healer Fights to Clear His Name”