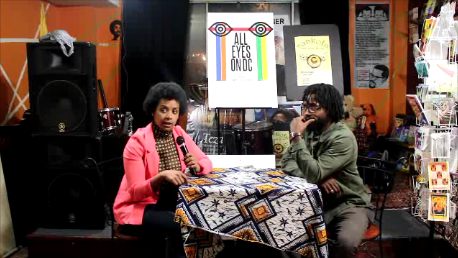 Sickle Cell disease, an inherited blood disorder that prevents hemoglobin from delivering oxygen to blood, counts among the most inconspicuous ailments of its kind.

So much so that medical professionals often mischaracterize symptoms that show up in those carrying the trait as something less daunting. D.C.-based policy analyst Ashley saw this through the struggles of her older brother Marqus, 32, who was first diagnosed with Sickle Cell at 6 months. The upcoming film “Sick Cells,” produced by Ashley and Marqus, documents those experiences, and that of other families, over the course of eight years.

Last month, Ashley appeared on AllEyesOnDC’s “A Night of News & Music” at Sankofa Video Books & Café where she touched on Marqus’ bout with Sickle Cell and the Valentine family’s efforts to connect him with the most effective treatment possible.

Since Marqus’ diagnosis, the Valentines have gone toe to toe with the medical establishment to ensure that he receives the best care possible. Ashley’s mother, a nurse of more than 30 years, took the reins, working closely with doctors and directing medical teams in the day-to-day work involving her son’s care. In their journey, the Valentines debunk misconceptions about the disease that are used to marginalize Black people. They have also taught other families going through similar situations about the importance of self-advocacy.

In this segment, Ashley and Sam, AllEyesOnDC host and founder, talk about Sickle Cells causes and effects, implicit bias in the medical industry, and the prospects of finding a cure. Check out the interview and watch the trailer for “Sick Cells,” slated to be completed really soon.