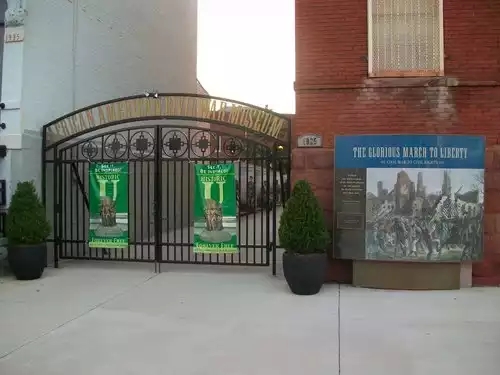 Ninety years after journalist and historian Carter G. Woodson created what’s now known as Black History Month, the yearning to celebrate a storied past and secure a prosperous future looms larger than ever among people of African descent living in Western society.

“This hallowed ground reminds me of things that are painful, like driving down Robert Lee and Jefferson Davis Highways,” said Dr. Frank Smith, head of the African-American Civil War Memorial, referring to major roads in Virginia named for well-known Confederate figures during his remarks on the evening of Feb. 2. “Some of these things have to come down. Let me just say that only black people don’t have a role. I’m challenging white people to help clean up the pollution. I care so they have to care too. These hallowed grounds matter because they remind us of a time when black people didn’t have power,” Smith added.

Though speakers reflected on the tragic events of the past year, including the massacre of nine churchgoers in South Carolina, much of the discussion on that brisk Tuesday night focused on buildings, events, and symbols that document black achievement in the United States. The theme for the 2016 Black History Month program, “Hallowed Grounds: Sites of African-American Memories” spoke to that goal, as reiterated by representatives of the Association for the Study of African-American Life and History, an organization Woodson founded in 1915.

In his comments, Chavis, NNPA president and CEO and well-regarded figure of the Civil Rights era, called on his contemporaries to pass on the baton to younger activists, a group he said was better equipped to address contemporary challenges facing people of African descent in the U.S.

“It’s our obligation to raise a new generation of freedom fighters and intellectual giants. We can’t afford a cultural and generational gap,” Chavis said. “This is about whether this democracy will be inclusive or exclusive. Our history has shown us that every benefit black people have gotten has benefited everyone else. Everyone should be celebrating our struggle. Long live the spirit of our people and our history.”

Retired District government employee Taji Anderson echoed Chavis’ sentiments, telling AllEyesOnDC that she often shares black history facts with her children and grandchildren at home and through social media. For her, doing so is a matter of saving the black race. During her interview, Anderson said the issues young people currently face come from a lack of understanding of sacrifices their ancestors made.

“Youth wouldn’t be shooting each other if they knew of their ancestors and had a sense of pride about how they died to get them here today,” Anderson, a relative of Children’s Defense Fund founder Marian Wright Edelman, said, noting that her grandson’s thirst for knowledge increased after watching “Selma” in theaters in 2014.

“We keep the study of black history going in our family. We always bring it up for the young folks coming behind us. Parents and schools haven’t taught our young people about their heritage and history. We have to instill education and respect for one another in these children,” said Anderson, a former employee of the District Department of Transportation who lives in Northeast.

While Millennial Ariel Alford agrees, she said that elders must commit to engaging young people and including them in Black History Month festivities. Alford, who attended the kickoff celebration with her friend, counted among a handful of youth in the room that evening.

“This was a missed opportunity to include young people. We can’t learn how to do these things if we’re not involved,” said Alford, a middle school teacher. “A high school class could have aided in this project to make it more intergenerational. It’s important for us as African people to have spaces like this where we can convene and have an honest discussion about the empire we’re living in.”