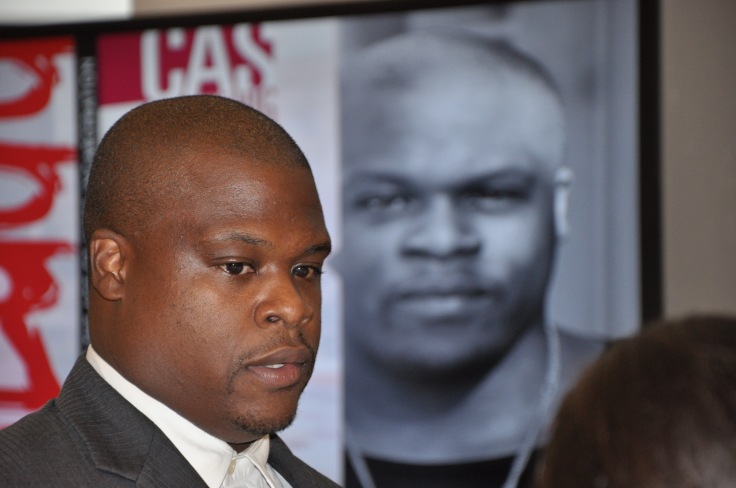 By his 11th birthday, Tony Lewis, Jr.’s father, alleged head of a D.C. drug syndicate, had served nearly two years of a life sentence in a federal penitentiary on the other side of the country. HIs mother also developed what would later be diagnosed as schizophrenia. Even with the guidance of a loving grandmother, Lewis said he navigated life in the District with his street smarts during a time when the city gained a reputation as the “murder capital.”

Decades later, Lewis, college graduate and community activist, reflected on those childhood experiences in “Slugg: A Boy’s Life in the Age of Mass Incarceration,” a book that has been heralded as a coming-of-age story for those trying to find their way.  He recently discussed his published work, childhood memories, and current events during an event at University of the District of Columbia (UDC) in Northwest, his alma mater and an institution that has given countless  Washingtonians a pathway to a better life.

“In my life of service, I get asked this question of how I didn’t fall into this trap,” Lewis told Dr. George Derek Musgrove, professor at University of Maryland Baltimore County and moderator at Wednesday night’s discussion. “Many people in my community succumbed to addiction, prison, [and violence]. I’m still trying to figure out the process and chart out how I became a respected activist. The way I could connect with people was being transparent. My story helped people see the greatness in themselves,” Lewis added.

More than 200 students, professors, and D.C. residents filed into UDC’s Theater of the Arts for the two-hour event that included a question-and-answer segment and cupcake social. Audience members watched as a  montage of Lewis family photos played from a projector. During the discussion,  Lewis and Musgrove discussed violent crime in D.C. during the 1980s and 1990s, the school-to-prison pipeline, discrimination of returning citizens, and the lasting effects of mass incarceration.

Such conversation provided Lewis the opportunity to reflect on his life experiences, give historical context to his father’s incarceration, and rail against the forces he said vilify poor black people for decisions they make out of desperation.

“America took the African–American drug dealer and voided him of his humanity. My father wasn’t a bad person. He just made bad decisions,” Lewis said. “ When [mass incarceration] is so entrenched in your community, you don’t really see it as a bad thing. Two of my cousins are serving more than 40 years in prison. The title of the book isn’t to catch you on to something. It’s to show you that people from my childhood are either dead or in prison.”

Lewis, a community star of sorts, found fans in the audience that evening.

Christopher Mitchell said Lewis’ story challenged a misconception that UDC is a subpar institution. Mitchell, a freshman at UDC, enrolled in a tech training program at Year Up shortly after graduating from Friendship Collegiate Academy in 2012. However, failed attempts to gain employment drove him to enroll at UDC, where he’s currently pursuing a bachelor’s degree in criminal justice, a field he said piques his interest.

“Being at UDC makes me feel great. It’s good seeing people adding to their life and doing something constructive,” Mitchell told AllEyesOnDC. “ This school allows people who can’t afford an out-of-state college education to live their dream. Tony Lewis, Jr. broke down so much and made these concepts simple so that people could understand it. That’s how I could relate.”

Latanya Rogers, professor of literature at UDC, shared Mitchell’s sentiments. She told AllEyesOnDC that, unlike marquee academics, her students could see Lewis in themselves.

“This is a nontraditional campus so our students are familiar with that crossroads experience where they have to make that choice,” Rogers said. “The lesson for them will be in what factors helped Tony Lewis, Jr. choose the right path when he had so many opportunities to go the wrong way. Also, he’s so relatable. He’s not a big shot telling people what to do.”

Anika Spratley Burtin, professor of education at UDC, said stories like Lewis’ inspire her work at the university. Burtin started her tenure at UDC in 2012 after working at Johns Hopkins. During her interview with AllEyesOnDC, she too challenged fallacies about the university, saying that students’ desire to better their lives compels academics to leave flagship institutions to teach there.

“Hard-working staff and academics come here to change lives. UDC provides an opportunity for our students to [determine] their life trajectory,” Burtin told AllEyesOnDC. “If our students are native to the area, what does that say about our community? They should see UDC as a beacon. You can get a quality education and make your dreams come true.”